as reviewed by Marshall Nack

This review took a slightly different path and as such, it took a while for me to gather my bearings. The AYON CD-5s CD player had arrived with 150 hours on it, to which I added another 50, all using the balanced outputs. Following good practice, I began by matching volume level to my digital front-end, the mbl 5021 transport and 5011F DAC. Accordingly, I had to draw down the AYON’s built-in analog potentiometer. (The AYON doubles as a line stage preamp.) I set the units front panel display to –13, and at this point, I started taking notes as I liked what I was hearing.

But I thought I could make it better. We all know that analog volume pots are supposed to sound best wide open. So, I swapped over to the AYON’s single-ended outputs because S-E output levels are always lower than balanced and, besides, the importer had mentioned he preferred the S-E mode, so I wanted to try it out. But I didn’t much care for what I heard. It was mushy. Another round of burn-in to form the S-E outputs was in order. 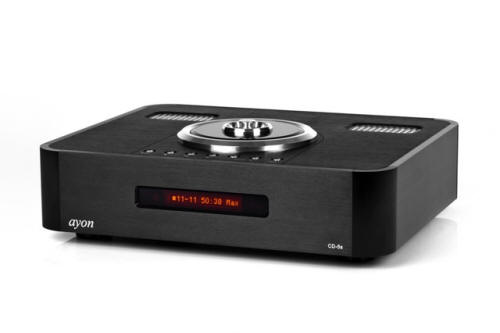 After giving it an additional 24 hours of burn-in, the S-E output sounded robust and tubey, but had a degree of fog covering the soundstage. At this point, I went back to the AYON’s balanced outputs, only this time with the volume wide open. It was certainly more neutral than the S-E outputs. The fog had lifted—but now I was hearing congestion on signal peaks. 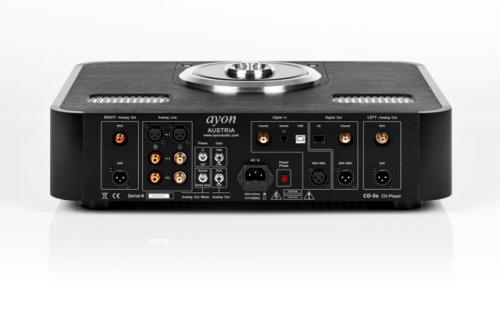 “What gives?” I wondered. I called up the importer the next day to bounce it off him. We decided the likely explanation was the input circuit of my mbl 6010D preamp was overloaded by the high output voltage of the AYON.

Dummy! The realization smacked me in the face. Of course it is! What I was doing amounted to feeding the output of one preamp into another. A line-level source component like a DAC typically put out 2 volts. The AYON in S-E mode with the volume up puts out 4 volts, 8 in balanced.

I’m focusing on this because it is an important point for anyone considering a CD player with line stage functionality, and also because now that I understand the reason behind what I was hearing, I can judge the AYON accordingly. Optimum playback was undisputedly the setting I had begun with—the AYONs XLR outputs and reduced volume. Everything I say in the appraisal that follows pertains to this setting.

BTW, in case you’re wondering, I know the next logical thing to try was the AYON doubling up as CD player and preamp, but I didn’t have the right wires to explore that option.

Eight is a lot of tubes for a CD player. In addition, the CD-5s has a host of other design features that I associate with its pedigree, the laudable AYON house sound, a brand known for very high quality (and expensive) tube gear, especially SET amps. 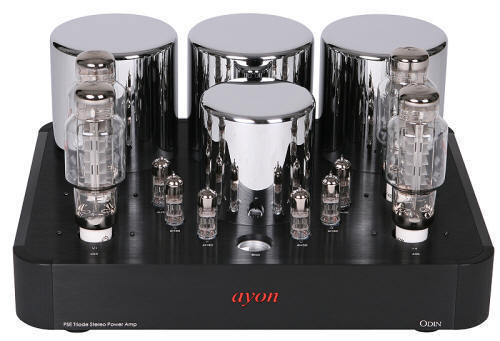 The CD-5s is single ended; it doesn’t employ negative feedback; it is a pure tube design with no solid state devices in the signal path; the output stage is Class-A using triode vacuum-tubes; the power supply is tube rectified. 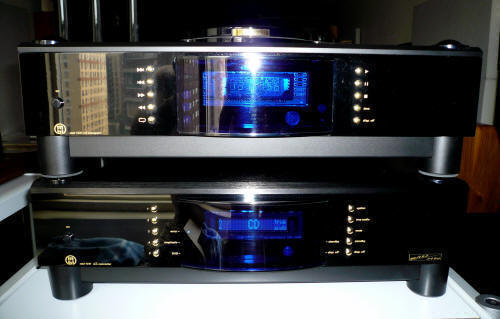 That topology couldn’t be further from my solid-state mbl digital separates. However, on first listen, the two products did not sound that far apart. It was certainly richer, more intimate and more immediate sounding (all adjectives that would characterize any component from AYON) even in its most neutral XLR mode, but I bet you would not call it tubey if you were to audition it. The AYON was like my mbl in how easily it sidestepped all of the common digital issues. Nothing called attention to itself, and everything I wanted to hear was there.

Let me describe the soundstage it reproduced with Sanctuary, a Mapleshade CD (MS 09932), arguably one of Pierre Sprey’s more successful recordings. Pianist Larry Willis, Mapleshade’s music director, is the featured artist. Most of the tunes are low-key, intimate arrangements taken at largo tempi, exploring matters of the soul and spirit. 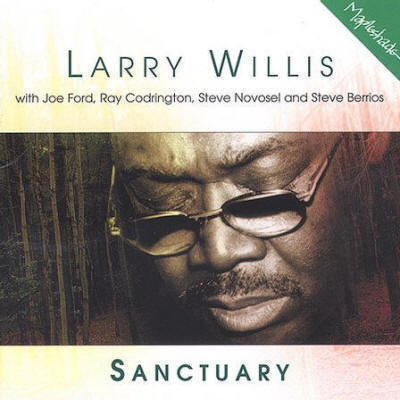 From the very beginning of Track 2 your attention is drawn to the weightiness and richness of the Fazioli piano employed for the session. It sounds different from a Steinway, to my ear more like the slightly darker Bosendorfer. The piano is naturally recorded for a change; its entire image is just left of center. (I despise the typical piano miking, with the instrument’s left hand keys way over on one side of the stage, the right keys on the other.)

The small jazz combo is joined shortly by a classical chamber string section, which images as a group on the far right and it, too, is a bit dark. The strings have an attractive woody quality, but I’m thinking they could use more texture. It’s interesting how the success of including unexpected instruments (the strings) is impacted by how well they are reproduced. I remember when I first heard the CD when it came out in 2003. I had a problem with their wirey, steely sound. Now I’m envious of their lovely tone. The AYON is imparting an extra dollop of body and fleshing out timbre—you’re not gonna get that midrange from solid-state gear!

And then my happiness is disturbed by odd noises emanating from the left channel, which seem to come and go in tandem with the piano. These turn out to be sympathetic resonances from the snare drum—why wasn’t the trap-set locked? They are very obvious with the AYON.

Cymbals sparkle sweetly, but they do not sizzle. That’s generally true—transient edges are rounded. I also admired the AYONs potent bottom-end—it is far from timid and dynamically more excitable than my mbl. The quality of bass is very full and fleshy/massive. Overall, this is not a bright sound; the tonal center is definitely weighted towards the lower midrange.

But then, you shouldn’t be too surprised that the AYON has these tubey characteristics. Given the topology and lineage, it’s what you’d expect. I’m happy to note, however, that this cluster of valve colorations (the sweet top end, the rounded edges, the added body, the midrange dominance, and above all, the beautiful tone) are present to a much smaller degree than you would encounter with classic S-E components—I’m thinking of Harmonix, for example, whose euphony is more pronounced and imposes a heavier footprint over the signal.

Sure, the AYON is doing this to a limited extent—it will flesh out the sound of thin CDs—but it balances that with added refinement. The classic tube sound is updated with modern virtues, like extended frequency response, reasonably tight bass, and surprisingly high resolution. 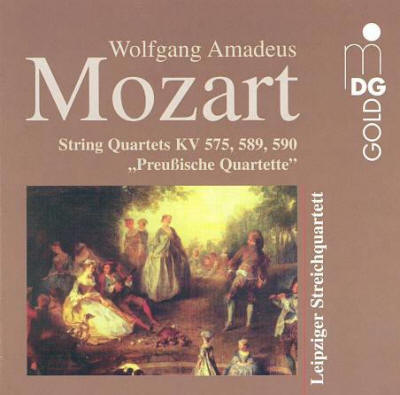 Let’s switch over to the Leipzig String Quartet doing Mozart’s String Quartet KV 575(MDG 307 0936-2). Again, stereo separation is excellent. It’s easy to pick out each member of the quartet, and not just by their discrete image on the stage. The AYON’s rendering of timbre makes me smile: a viola has a unique timbral character and the AYON nails it beautifully; it won’t be confused with the violin. Texture is also good. (I was worried about that because of the too smooth textures on the Sanctuary CD.)

The AYON re-creates the performance as if you’re in a wood-paneled, book-filled library. It’s sweeter, more airy and more ingratiating than the way my mbl front-end does it, and also from how the group sounds live. If memory serves, when I saw them perform in a smallish, wood-paneled church up in Ottawa, Canada, their sound is clean, accurate, incisive and tonally neutral. They play with a perfect amalgam of the two dominant, contemporary classical performance trends: faithfulness to the printed score, while giving full measure to expressive markings. 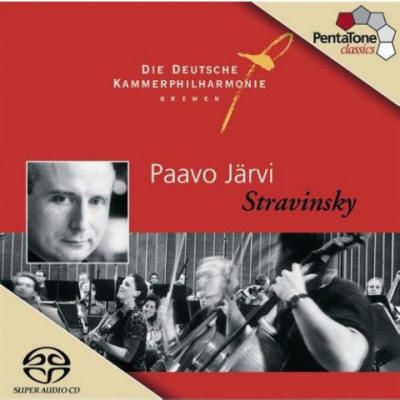 With larger forces like Stravinsky’s The Soldier’s Tale Suite (Pentatone PTC 5186 046), with Paavo Jarvi conducting the German Chamber Philharmonic Bremen, the AYON demonstrated a truly superior macro dynamic quality only found in the best gear. The machine was able to scale into crescendos with no sense of compression, no evidence of a dynamic ceiling, and this occurred without breakup or the introduction of amusical artifacts. Inside those crescendos, bass volleys had uncommon potency, while the soundstage remained open and quite expansive, especially in the width. With reference quality CDs, the Ayon developed a very convincing illusion of deep space with images completely detached from the speakers. The AYON let the music grow without compromising quality. You don’t hear that very often.

You may have wondered why I initially dwelled so long on the AYON’s alternative output mode and volume level. It is because I had issues when the machine was used that way. However, when set to the XLR outputs and the reduced volume, the AYON vaulted beyond those reservations to truly exceptional performance. In this mode, the machine did just about everything you could ask for. 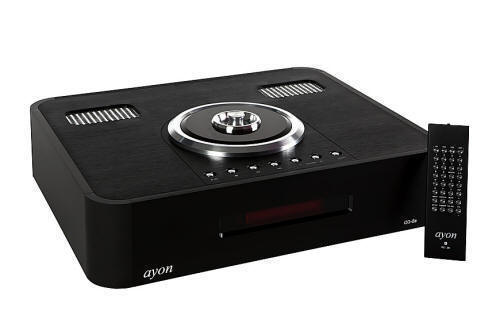 The CD-5s is surprisingly large and heavy. Its thick, brushed anodized aluminum chassis is stylishly black except for a pair of chrome mesh cooling ducts on top and the CD drawer cover, which is plastic. Aluminum was chosen because it is non-magnetic, among other reasons. The unit doesn’t get hot, merely warm to the touch. Function selector buttons are on top, back-lit in a cool way with a glowing red surround. Obvious care was expended to make the chassis vibration and resonance free.

The top-loading CD-5s can be used as line-level preamp. It accepts a full range of digital inputs plus two-line level ones, and it has a quality analog potentiometer. Switching among inputs and volume adjustment are accessible from either the chassis or the remote.

I situated the CD-5s on a Vibraplane ELpF. All cabling was the outstanding K-S Elation! As the unit has its own AC line noise filtration, I bypassed external power conditioning and plugged it into a prototype K-S passive power block.

Early on I determined the superiority of the 24 bit/192kHz upsampling mode. That stayed on for the duration.

What a pleasant surprise! The AYON CD-5s evidences none of the usual digital issues. There’s not even a hint of grit or harshness or missing texture. Oh, yes, tubey colorations are present—the sweet top end, the rounded edges, the added body, the beautiful tone—after all, this is a CD player with eight tubes from a company known for their SET amps. But the AYON CD-5s manages to keep them in check. They are present to a much smaller degree than classic “tubey” sounding components. In fact, if you were to hear it, I bet you wouldn’t single it out as particularly tubey sounding. It is a fine example of the latest generation of tube gear that melds these traits from the S-E world to modern virtues like extended frequency response, tight bass and surprisingly high resolution.

Those conclusions apply to the CD-5s used in balanced mode in conjunction with reduced volume. In that configuration the AYON CD-5s demonstrated a rare dynamic quality only found in the best units. It vaults to the top of the pack and I rate it a top choice at its price point.

Note: I went through several iterations switching between output modes and volume settings. In S-E mode, I found the tubey colorations prominent, too much so for my taste. Secondly, the AYON has a built-in analog potentiometer and can function as a line level preamp. However, at full volume its high output level overloaded the input circuit of my mbl 6010D preamp. Marshall Nack